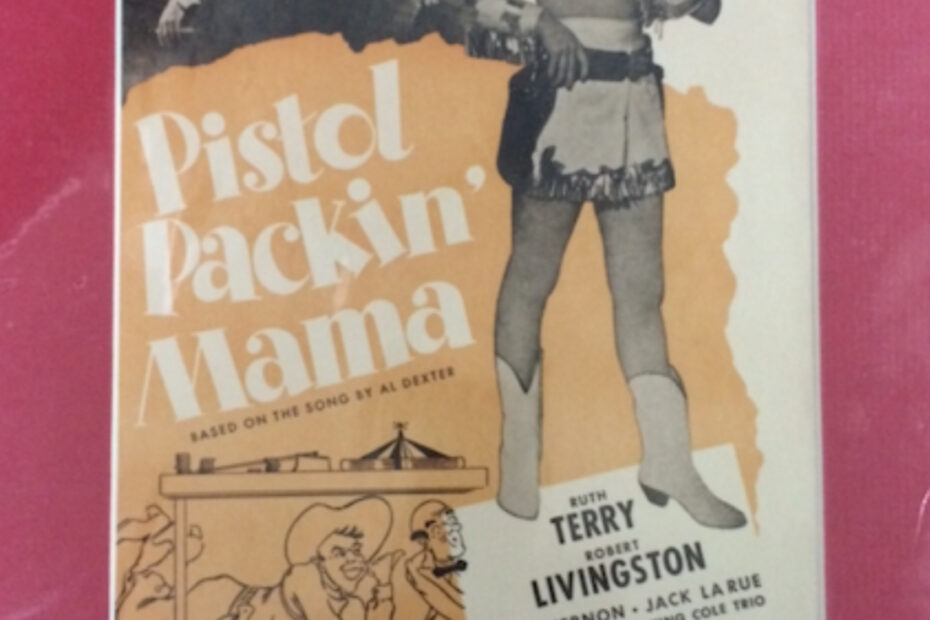 As the story goes, Clarence Albert Poindexter had a waitress in his Turnertown, Texas tavern who was fooling around with a married man. One evening, the man’s wife showed up, toting a pistol, and chased the waitress out of the bar and through a pasture fenced with barbed wire — which apparently didn’t slow either of them down one bit. The incident left Poindexter wondering just exactly how one should react when confronted by a pistol-packin’ mama.
The result was one of the biggest hillbilly-music hits of the 1940s, as recorded by Clarence under his stage name of Al Dexter. It became the first of four No. 1 hits he’d chart in 1943 alone.
Born on this day in Jacksonville, Texas in 1902, Dexter had been recording since the mid-‘30s. “Pistol Packin’ Mama” was his first major hit, and it was huge, spawning a Republic Pictures movie starring Ruth Terry and crossing over from the hillbilly and “folk” charts to become a No. 1 pop tune. It was later covered to good effect by Bing Crosby and the Andrews Sisters.
There’s a lot more that’s intriguing about Dexter, who for some reason or other doesn’t quite seem to possess the cachet of other country pioneers. A couple of sources, for instance, say that he was the first artist to use the term “honky-tonk” in a song, 1936’s “Honky Tonk Blues.” And the official Jacksonville, Texas website, www.jacksonvilletx.org, claims that in the early ‘30s he worked the Jacksonville area with a Black band “doing mostly local square dance parties and local private clubs.”
Al Dexter is a fascinating character and intriguing artist whom I like to feature from time to time on my SWING ON THIS program, heard every Saturday at 7 p.m. Tulsa time over radio station KWGS, 89.5 FM, and live-streaming at publicradiotulsa.org.