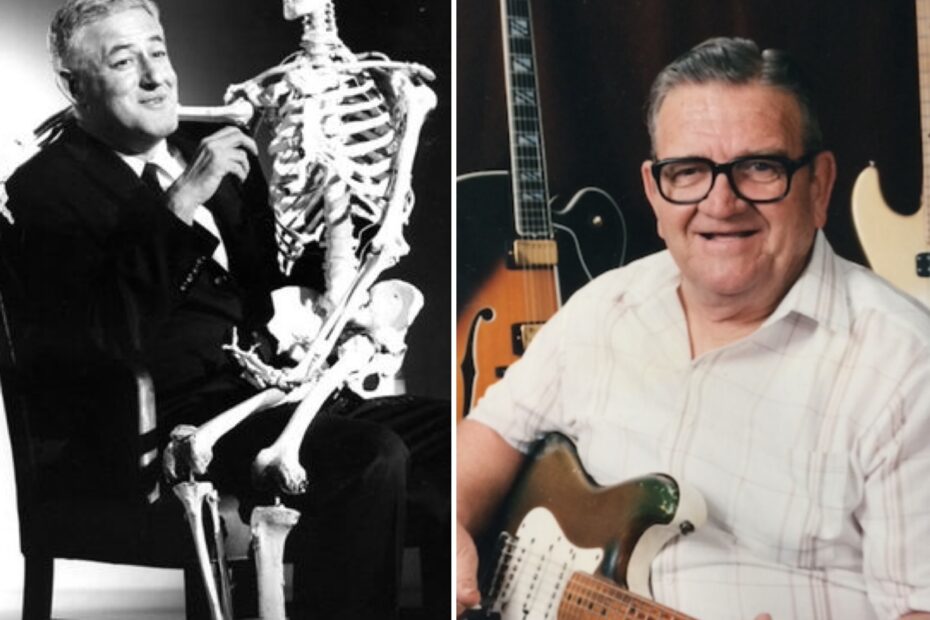 Now here’s a fun couple for you: Eldon Shamblin and William Castle. As far as I know, the master of the horror-movie gimmick and one of the greatest guitarists who ever lived never met one another. However, they were both born on this day, two years apart — in 1916 and 1914, respectively.

While I never had the pleasure of meeting Castle, his films — HOUSE ON HAUNTED HILL, 13 GHOSTS, THE TINGLER — remain cherished memories from my childhood and teen years. That’s despite the fact that my small-town movie theatre didn’t have the wherewithal to employ some of his more famous cinematic stunts, like the little motors installed in theater seats that gave patrons a shock in THE TINGLER, or the skeleton that floated over the audience for HOUSE ON HAUNTED HILL. (Much later, however, I did get to interview the scripter of those films, Robb White, for FANGORIA magazine, which was a great treat.)

I’m happy to say that I was friends with Eldon. In fact, when Billy Parker and I were doing the WOOLEY WEDNESDAY show on the original KVOO in Tulsa, we had him on the air for his 80th birthday celebration and the official release of what would be his last album, THERE’LL BE SOME CHANGES MADE.

Among other things, Eldon was one of the linchpins of western swing, functioning for a good while as Bob Wills’s arranger as well as guitarist and working with Johnnie Lee Wills, Leon McAuliffe, and many other greats as well.        But then again, Eldon was one of those greats himself, and that greatness extended to his personality as well as his guitar prowess. In the early ‘90s, he appeared on the Tractors’ first album, which would go multiplatinum. In its liner notes, bandleader Steve Ripley got it exactly right when he wrote that Eldon had “the world’s greatest attitude.” He was a wonderful, self-effacing guy, forever downplaying what everyone — including Eldon himself — knew was a a level of skill and innovation on the guitar that few have achieved, before or since.