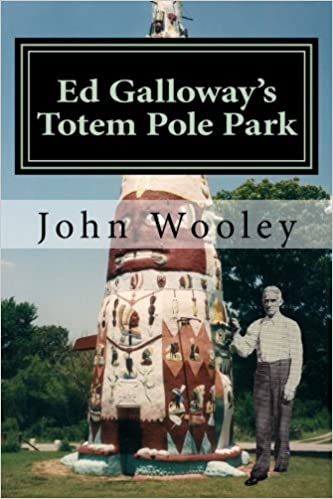 MARCH 30 — On this date in 1999, Ed Galloway’s Totem Pole Park, a few miles east of Foyil, Oklahoma, was named to the National Register of Historic Places. I have a real affinity for that particular roadside attraction; growing up in Chelsea, about six miles away, I visited it many times with my mother and brother while was a boy. Later, a story about the park became the first thing I ever sold to the TULSA WORLD, leading to my 23 years as an entertainment writer there during the last great days of the newspaper business.

And then, a few years ago, my old Chelsea classmates David and Patsy Anderson — the park’s directors — asked me to write a book about the place. I did. It’s called, simply enough, ED GALLOWAY’S TOTEM POLE PARK (first published by the Rogers County Historical Society in 2014). As I wrote it, I learned a lot of fascinating stuff about the unique man who essentially created the whole park — including its centerpiece, the world’s largest man-made totem pole — on his own, simply because he wanted to.

If you’re interested in learning more about Totem Pole Park and its creator, or even if you aren’t, you can find the book on amazon.com or at the park’s gift shop.