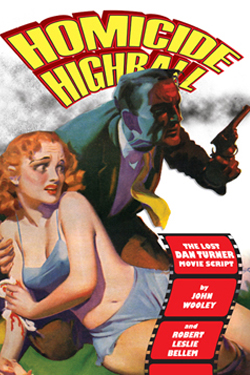 Back in 1989, I wrote the teleplay for a made-for-TV movie called DAN TURNER, HOLLYWOOD DETECTIVE, which ultimately played in prime time over some 200 stations via the old LBS network. You may have seen it. In 1990, it was released on VHS by Fries Entertainment (as, unfortunately, THE RAVEN RED KISS-OFF), and while it has yet to secure a DVD release, it’s been kicking around for some years on various cable-movie channels.
Initially, the powers-that-be wanted a contemporary setting, although Dan Turner — a long-running pulp-magazine character — would retain the qualities (or vices) on display in pulps like SPICY DETECTIVE and HOLLYWOOD DETECTIVE during his 1930s-40s heyday. So I wrote the script that way, with a character right out of the classic hardboiled mold coming up against ‘80s types, including a metalhead cabbie.
Just about the time I finished the script, director Chris Lewis brought me the news that the backers had decided they wanted a period piece after all, so I spent a pretty frenetic week on deadline battling everything back to the 1940s, losing or transmogrifying a couple of characters in the bargain.
A few months ago, Bold Venture Press saw fit to print the original script, along with the pulp novelette it was adapted from and a new introduction, in a book called HOMICIDE HIGHBALL (the title of the original pulp story). Check it out online at www.boldventurepress.com or other outlets, including Amazon.
And while you’re there, you might want to look into THE TWILIGHT AVENGER RETURNS, a big book of 1930’s-style adventure that collects the first four stories artist Terry Tidwell and I did for Eternity Comics, back during the ‘80s black-and-white comics boom. There’s a ton of extras as well, all infused with a classic B-movie sensibility that’s thankfully shared by our publisher, Bill (The Mad Pulp Bastard) Cunningham at Pulp 2.0 Press (pulp2ohpress.com).
I’m very proud of both these books and feel that they provide solid entertainment value for fans of pulp literature and good old B-pictures. May I humbly suggest you check ‘em out?